Please take some time to read about this campaign by Living Streets to amend the Highway Code so that pedestrians are given priority. These amendments could help to make our roads and zebra crossings safer for us all!

Everyone should be able to cross the road safely. Together with their supporters, Living Streets have campaigned for safer crossings for years.

And they have good news – the proposed changes to the Highway Code say that drivers and cyclists should give way to people waiting to cross a side road junction or at a zebra crossing. Currently pedestrians only have priority once they risk stepping into the road. Support this change now.

We must make sure this important change happens. Thousands of people have already joined the campaign to make sure the Highway Code prioritises pedestrians.

The short survey is just four questions long. And once you have done that, Living Streets will show you how to respond to the Department for Transport’s consultation yourself.

SUPPORT THE PROPOSALS TO MAKE #WALKINGNUMBER1

Many supporters don’t feel safe crossing the road. Take Brenda from Enfield, she describes herself as a senior citizen, and says that the message to drivers about right of way is muddled. She says:

“All my life I was told that crossing side roads was priority for pedestrians. This doesn’t seem to be the case now.

“Traffic leaves side streets even when they can see you waiting. They will pull forward so you cannot cross and then I have to wait for ages before they enter the main road.”

Drivers will now be told, whether they are turning onto or off a main road at a junction, that they should give priority to people crossing or waiting to cross.

This is a big deal. That’s why we need to support the proposed Highway Code review.

Brenda is just one of millions of older people who stand to benefit from the proposals.

Please take a moment to join the campaign using their simple online form.

Shoppers and How They Travel 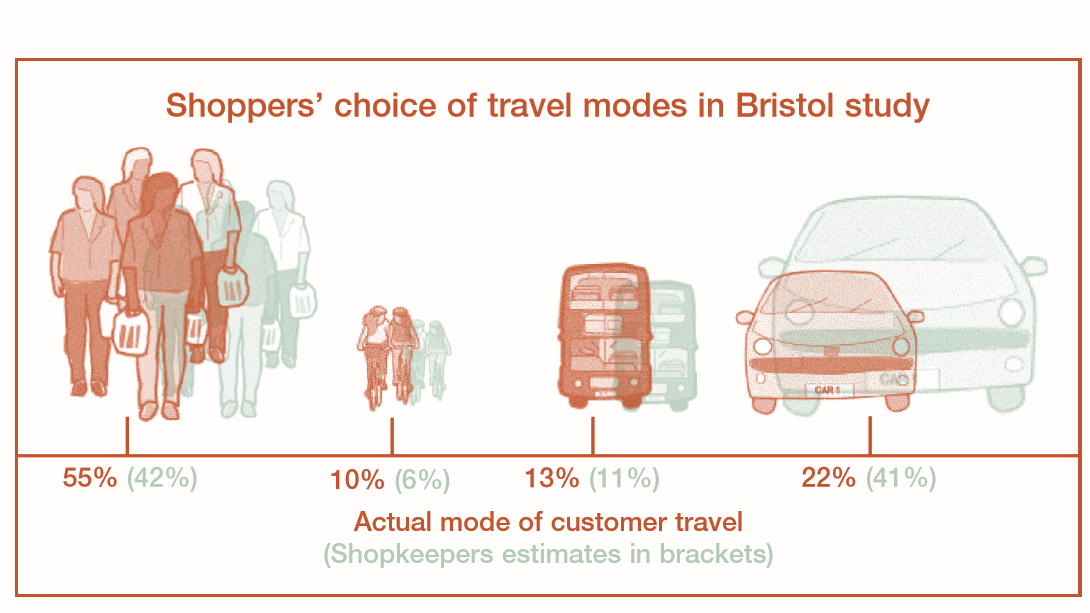 A study conducted by Sustrans in Bristol investigated how customers travel to two important shopping zones on the city’s VIVALDI project bus routes.

The study found that “retailers overestimated the importance of car-borne trade by almost 100%; they
estimated that 41% of their customers arrived by car, whereas only 22% had done so. In fact, more than half of shoppers walked to the shops.”

Sustrans suggests that retailers overestimate the usage of cars and that after conducting interviews with traders, shoppers and neighbours, local people would like to see the impact of travel reduced. Walking to local shops and meeting friends and acquaintances is an enjoyable social activity, as well as an efficient, environmentally-friendly method of shopping.

Shopping within an environment free from noise, pollution and the threat of motor traffic is an experience that every pedestrian enjoys, and it’s great to see that urban developments across major cities are conducting studies such as these and acknowledging the importance of zones with reduced traffic.

Such studies and developments could provide an insight into the Uplands becoming a cleaner and safer zone with reduced traffic. The Uplands sees a lot of recreational usage in the form of parks, cafes and restaurants and could benefit from a more pedestrianised area.

Further reading on the study: Shoppers and how they travel

As acting chair of Cwmdonkin Park and longstanding Uplands resident, I met with John Sayce of Uplands Living Streets, and Rob Humphreys, another longstanding Uplands resident, in a socially distanced meeting in Cwmdonkin Park on Wednesday 29 July. It was good to see that the park was being well used that day (all the tennis courts were in play) – as the park does seem to have been well used throughout the corona virus restriction period. Mostly, with some unfortunate exceptions, in a responsible way in accordance with Welsh Government guidelines.

We agreed that Uplands residents are very lucky to have such a lovely historic park in our area – as well as all the other green parks and open spaces nearby, including Brynmill Park, Singleton Park, St James Park and the Hillside Wildlife Corridor. The purpose of the meeting was to discuss possible low cost ways of linking these parks and spaces for walkers and possibly cyclists, to provide green routes to and from Uplands.

One possibility considered worth exploring would be to make The Grove more pedestrian friendly, without loss of parking spaces, by making the western carriageway (which is currently one-way) a two-way street for motor vehicles. Other proposals discussed include the newly agreed path from the old Townhill campus to Penlan Crescent (just above Cwmdonkin Park) and possible further connections between Hillside Wildlife Corridor and Uplands/Ffynone. It was agreed that all were worth exploring and that further discussions would take place. And although Friends of Cwmdonkin Park is not a pressure group, it is very much part of our mission to support anything which could potentially enhance the park and its responsible use.

Social Distancing and Uplands: What could be improved?

I hadn’t really taken it on board until the pandemic and social distancing hit us. Living in the Lons at the top of Glanmor Rd., I often came down to the Uplands to do some shopping or meet friends. I’d cross Sketty Rd by the hairdressers and walk on the pavement down to Uplands News or Crumbs. But I never came down past the shops like Subway as it made me slightly uncomfortable. Now I am able to understand it. People get too close to me there and seem to invade my personal space. I’d have to step out into the bus lane, so that I didn’t bump into someone passing me or in the bus queue. More than once I had a bus or taxi hoot at me!

So, if I’d had to step out into the traffic flow, I am sure that others will have done the same.  What must it be like if you use a buggy or have a disability?   There just isn’t enough space for shoppers and walkers as the traffic seems to have pushed us humans onto the very edge of the 30 metres roadway.

So, could we do better than this for Uplands? What would make it a better experience? Take a trip around Swansea with me to see what can be done.

First stop, the Kingsway, where there used to be 4 lanes of traffic making the road a nightmare for pedestrians. Now it is down to 2 lanes with trees, grass and shrubs planted along the wide pavements, as well as decent benches and seats to sit on.

Let’s head west up to the Killay shopping centre where even a small courtyard can provide a place to shop and gossip, away from the polluted air.

Next stop is the Ice house piazza to see how trees can be trained in a confined space. And while we are down in the marina take a look at the sculptures along the promenade and imagine some nice artwork in the Uplands.

Our trip to the marina area finishes opposite Morgans, where the home owners on Somerset Place have painted their properties in an array of colours to brighten any day!

We definitely need to sit down now for a cup of coffee and what better place to finish than Verdi’s where it is possible to sit down outside and watch the world go by.

Is any of this too much to ask for the Uplands? 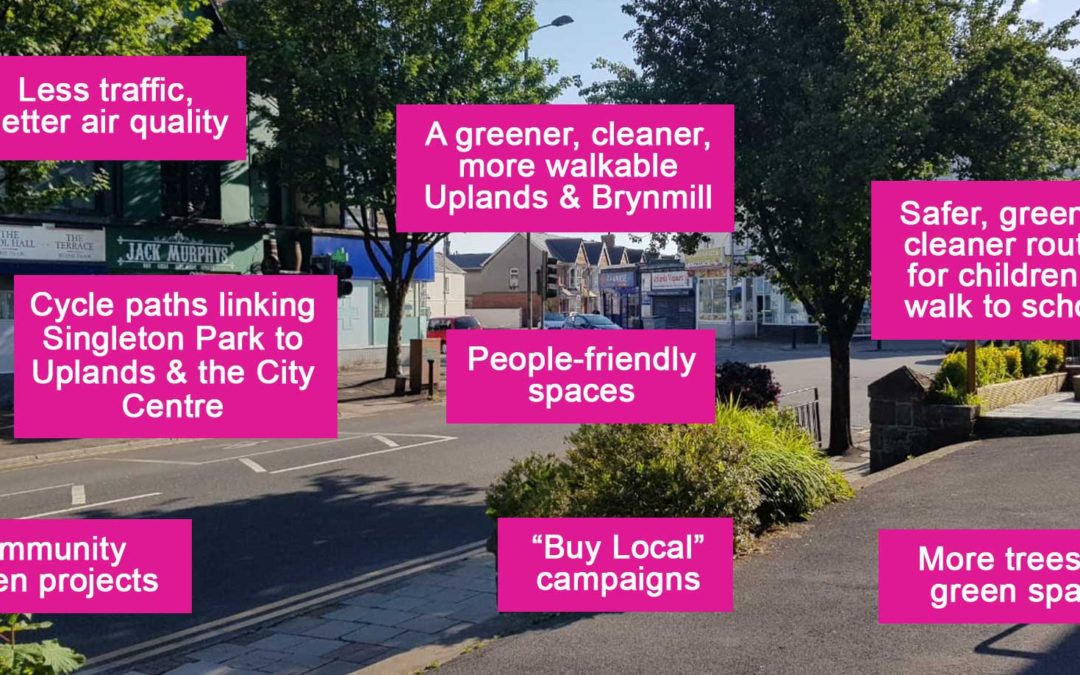 Thanks to everyone who came along to the first meeting of the new Living Streets local group for Uplands & Brynmill.  We had a really positive discussion about what the key issues are for Uplands, including air quality, safe walking to school, supporting local businesses, and reducing the dominance of traffic throughout the area, with lots of ideas for how we might seek to make Uplands greener, cleaner and more people-friendly.

There were 19 people at this initial stakeholder meeting, including residents, local Councillors, and representatives of various groups including the Friends of Cwmdonkin Park, the Uplands Traders Association and others.

Here are the full notes from the first meeting of Uplands Living Streets.

Please watch this video from Living Streets, which gives a flavour of what Local Groups like ours are all about.

The purpose of today’s meeting was to launch the group and start inviting local people who share our ambitions to join us.  In terms of which ideas the group decides to take forward, and what to do next, it will be up to the group, going forward, to reach a consensus about proposed activities and campaigns.  As a community group, we have no “power” to make big infrastructure changes in Uplands – we can only make the case for the changes we’d like to see, and promote, educate and engage people around our ideas.  If you are interested in joining Uplands Living Streets, you are VERY welcome.  Please Click Here to join online or email UplandsSwanseaGroup@livingstreets.org.uk.

Living Streets is a national charity for everyday walking.  “The time has come for us to create more liveable, healthier streets across the UK and to demand for practical and effective actions that make that happen.”

As a local group, Uplands Living Streets is a volunteer-run local group, campaigning and collaborating for a greener, cleaner, happier & more walkable Uplands & Brynmill in Swansea.